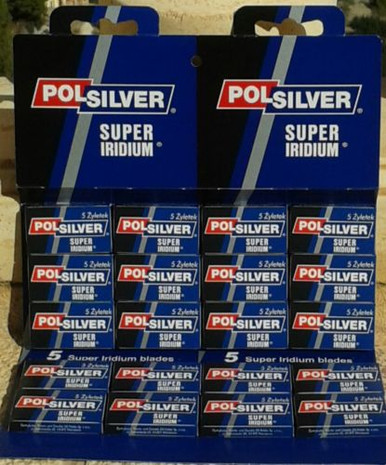 We have been informed that production of the Polsilver Super Iridium DE blades ceased at the Saint Petersburg factory on 1st August 2016. The blades will gradually be phased out in the areas of Eastern Europe where they are currently distributed. We have taken steps to garner reasonable stocks and expect to be able to maintain supplies and prices on our website, at least in the short to medium term. In the long term, it is inevitable that stocks will eventually start to run out.

We do not deal directly with Procter and Gamble in Russia, only their official Eastern European distributors, so we can only guess as to the motives behind the decision. It is likely to be some sort of Corporate 'streamlining', in line with their general policy of gradually phasing out DE blades in lieu of more modern (read more profitable) alternatives.

We do also know that the Polsilvers will eventually be replaced by Gillette Platinum blades in these particular areas, so P and G obviously have no immediate plans to completely abandon distribution of DE blades in East Europe. The Gillette Platinums are very fine blades too, though somewhat more expensive, another possible reason for the change??
We do hope that this information is useful, though we should reiterate that we do not expect to run out of Polsilvers in the short term!

These top quality, super sharp AND super smooth blades are manufactured in Russia, and are consistently ranked as one of the best in the world...... now available in the UK at a competitive price.

The blades come in individual packs of 5.